FOnline: Ashes of Phoenix is a Fallout MMORPG based on the FOnline engine. It takes you to Phoenix, Arizona, around 2220.

The city miraculously avoided its global destruction during the Great War of 2077, and a well preserved part of its center remained almost completely unnoticed for almost 150 years. Eventually, a rumor speaking of plentiful resources and intact buildings has been spread into the Wasteland. Independent organizations showed up, preparing themselves for an unavoidable conflict with each other, while stronger forces remain hidden, waiting for the situation to evolve and give them the opportunity to achieve their objectives.

You are a Wastelander, coming to Phoenix for food and adventure. Fortunately, factions there are happily accepting extra manpower in their ranks. Make your choice, and join the battle for the city. 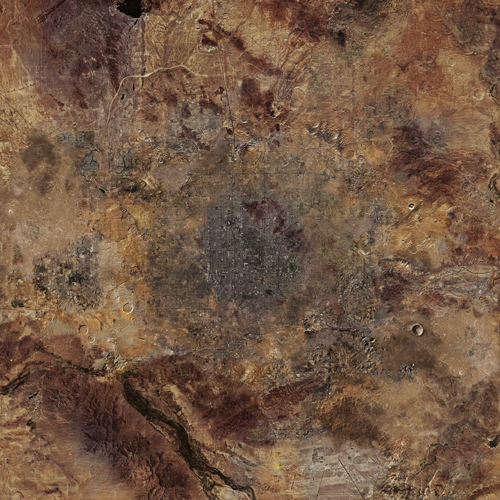 Ashes of Phoenix is a PvP oriented game. It encourages players towards cooperation as well as competition. Recently arrived in Arizona, you’ll have the opportunity to choose a faction composed both of Wasteland characters and other players. In its ranks, you will make your way, explore the Wastes, gather resources, craft gear, barter precious items, gain experience and weapon mastery. Then, you’ll be able to gather with your mates, create new active cells into your faction, explore the city and its undergrounds, face terrifying creatures, control resources, use your sense of diplomacy with other factions and defeat your enemies to become the unique master of Phoenix.

Ashes of Phoenix could really be considered a new game, and even the most experienced FOnline players will have to forget a lot of what they learned so far. Here are some of the main assets:

Q1: Can I one-hex?
A: Not really. You can shoot at someone from one-hex, but unless the gun states you get a lot of bonus damage, don't expect them to immediately burst into spaghetti confetti after one shot.

Q2: Is Ashes of Phoenix a PvE or a PvP game?
A: The focus clearly is PvP, though quests and other activities are available as well. Encouraging players to cooperate with each other in order to achieve quests and dungeons is something we like.

Q3: What is the level cap for my character?
A: The soft level cap is 24 but it is still possible to level up after that with a different list of perks, reduced skill point and health point gains. You'll be able to develop secondary capacities and become more versatile as you improve your character level.

Q4: How many alternative characters can I have?
A: While we don't plan to enforce a one-char-per-player rule, the possible gains of having a second char are in no relation to the trouble it is worth to obtain the same status of reputation and experience again. Dual log/fast relog should not to give any real advantage over other players.

Q5: Is there a crafting system?
A: Yes, every char can potentially craft everything. The crafting system will involve gathering, mining and scavenging while schematics can be obtained from your faction or through other means.

Q6: Are any of the old Fallout maps recycled?
A: The vast majority of maps were made specifically for the game, though some non-core locations contain assets from other maps.

Q7: Are there any safe areas in the game world?
A: Each faction headquarter will be a guarded place for the members of that faction. Steal skill has been disabled and replaced.

Q8: Do I have to join a faction or can I play as a loner?
A: Joining one of the major factions is necessary, otherwise you'd miss out on the key features of the game. Playing a loner it is not supported in terms of game mechanics and balance. There are other FOnline servers that focus on that playstyle.

Q9: Is it possible to have mercenaries or slaves?
A: While commanding such NPC's won't be available for a time, we might introduce such a system in the future, but with a different approach that will be suitable to PvP.

Q10: What will the PvP be like?
A: Apart from open PvP everywhere inside the Core, several town control-like events can be started by faction members on Core-maps. With time, several different types of events will be implemented in order to take control of a map and gain benefits influencing the war.

Q11: What about turn-based combat?
A: Turn-based combat is completely disabled. The core maps have to be Real Time by default and there is no point having to come up for a whole new balance for the sake of a couple of world-map encounters.

Q13: Can I have my own private place?
A: Every faction member with an average reputation will have his own private room that is secure.

Q14: Is it possible to get special encounters?
A: Special encounters are planned to contain special quests and dialogues, they are supposed to be more common but less "rewarding" in terms of gear.

Q15: Is it possible to obtain Bozars, Power armors and other high-tech equipment?
A: There are 3 tiers of weapons, starting weapons, pvp weapons and special weapons. Roughly 80% of all weapons fall into the second category and are roughly just as strong. Tier 3 weapons like the Vindicator or the Bozar might not be craftable under normal circumstances as tier 2 weapons, but will certainly be available to the player at a certain price. More info about weapons over there.

Q16: Are any vehicles in the game?
A: Vehicles will be introduced at a later stage of the game, when the necessary core features will all be implemented.

Q17: How are caps/scrips obtained?
A: Most of the currency will be awarded to the player for participating in Zone Control and other events that might entail PvP/player interaction. Farming, trading, crafting, scavenging and similar ways to earn money are still worthwhile, but less so than PvP.

Q18: Will there be any cooldowns for crafting/gathering/etc?
A: Cooldowns are removed except for special cases. There are other mechanics to guarantee balance, such as 'Bandaged' timer which gradually reduces successive healing' efficiency over a short period of time.

Q19: Can I join the dev team or contribute to the server?
A: Quests and maps as well as carefully thought out suggestions are generally well received. If you want to seriously contribute to the project, you can find our recruitment thread over there.

Q20: How is development going on?
A: AoP's status can be checked anytime here. We're constantly working on improving the game.

If you have more questions, please visit our forums.
^
Featured Video
Status